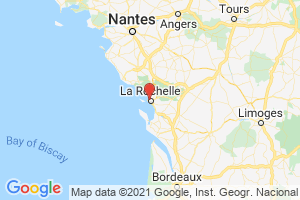 History of the Château du Clavier

The Château du Clavier was built in the 19th Century by the Hivert and Pellevoisin family, who were important people in the brandy business, providing the “HP” initials on the façade of the chateau.

On 17 May 1858, Louise Hivert who inherited the Hivert & Pellevoisin Cognac house, married Auguste Godet at the chateau du Clavier. Auguste, who was notable for his innate business skills, presided over the fusion of the two companies of Godet and Hivert & Pellevoisin, creating a very important market presence. With this alliance the history of ‘GODET Cognac’ at La Rochelle was started.

48 hectares of vines were planted on grounds adjoining the château, in order to pursue and develop their business activities. Then in around 1875 phylloxera arrived from America and progressively affected the entire region. Little by little the cognac houses fled La Rochelle, the worst-affected wine–producing area to move inland, particularly to Cognac.

Despite this the house of Godet decided to stay in La Rochelle and to replant their vines using American root stock. The vineyards were re-established slowly but surely.

Gradually Auguste Godet lost interest in Cognac and showed a preference for botany. He became passionate about horticulture and created a glass house at Clavier, and so the chateau was highly maintained by a virtual army of gardeners specialising in the maintenance of glass houses and conservatories. The chateau benefitted from a magnificent glass canopy and a terrace with sea views.

On the ground floor there was a large vestibule, lounge, dining room, library, study, kitchen, pantry and bathroom. The first floor comprised 5 grand bedrooms. On the second floor were the servants’ quarters and attics.

Unfortunately the war resulted in the loss by the Godet family of the Domaine du Clavier with its 48 hectares of vineyards and the Bonnodeau farm located nearby.

The château went on to be requisitioned by the German army, who turned it into a school for non-commissioned air defence officers. The aim was to set up three defensive bases in La Rochelle, building 18 bunkers in the grounds facing the chateau, mainly to be used to hide weapons, but they were also used for archives and storing foods. The 3 bunkers along the road were used for guarding the chateau in case of attack.

At the end of the war the château burnt down.

After it was rebuilt the château was used as a holiday camp for the children of parents employed by the Cerrabati tile company, then as a stopover for travelling people.

From 1970 to 1975 the château du Clavier was home to a dental laboratory together with a health insurance company. During this period the area had poor bus services and the laboratory soon closed.

In 1978 Lagord council bought the chateau.

People moved in without permission to open a recording studio for the band ‘Black Label’ and Cristal Productions, then the chateau was left empty and abandoned, until it burnt down for a second time.